As I sail mostly single handed and shorthanded an autopilot is a must. This boat is rather responsive, need to be sailed with focus and the helmsmen need active on the rudder. So letting the rudders go for working on the foredeck does not work so good. Also, a autopilot make it possible to fokus on sail trim when solo.

I quickly decided that a simple tiller pilot is not what I wanted, so I went with a permanent under deck pilot. After some research I had two options; Raymarine Evolution or Garmin Reactor 40. As neither Raymarine or Garmin has any linear drive units that will fit good in the Elan 210 I searched for other drive units and found the Octopus RS Sailboat drive. I contacted Octopus Europe and they have been extremely helpful with information, and as dealers for both Raymarine and Garmin they helped assemble a complete system. Raymarine focus on selling complete systems including driver, so the price on a Raymarine system without driver was stupidly high. Garmin had more reasonable price on the core pack as they call it. Price and the fact that I installed a Garmin EchoMap Plus 72cv, and that Garmin uses standard NMEA 2000 while Raymarine uses there own SeaTalk resulted in that I went with Garmin Reactor 40 core pack and Octopus RS Sailboat drive.

Project is finished and the system seem to work fine. I do have some adjustments to do, finding a good damping setting on the Nexus NX wind instrument that is connected to the system, and figure out best respons and sensitivity on the Garmin Reactor system for different situations.
Two videos sailing with the autopilot in use.

2019-11-08
The autopilot kit has been delivered and installation has started. Currently working on the best way to fit the drive cable to the rudder linkage system. Octopus Europe has been very helpful with support.
Work has been delayed as I found some needed maintenance in the rudder-system that I done while working on it. 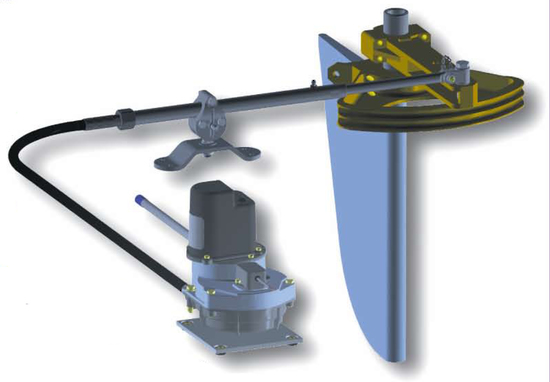 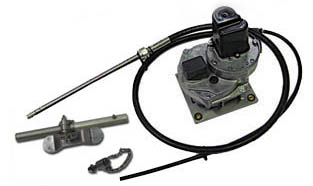 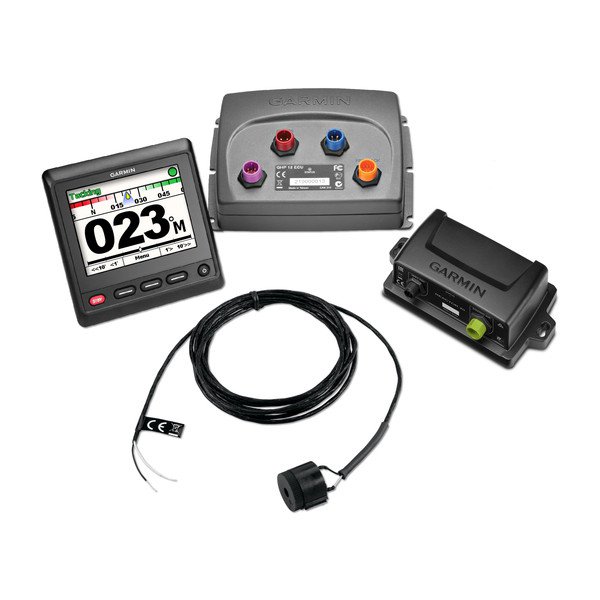 2019-12-30
After a lot of measuring and physical testing with temporary setups I decided for a mounting position and solution. The limited space and the fact that the two rudders and the linking arms between them move all over the limited space when operated made it difficult to fit the autopilot control linkage.

The solution was to extend the small tiller arm on the rudder axis a few centimeters, move the control arm to the rudders out to the extended position and use the old link position to connect the autopilot control linkage. This way I managed to get the angles and the movements of all parts to work out. As a result from the ratio between movement of the tiller and actual deflection of the rudders will change a bit but that should be acceptable.

Original rudder setup and linkage. The way the arms and linkages are designed it moves around a lot using almost all the space during full rudder deflection

New rudder setup with autopilot control linkage to the right. Angle of the autopilot linkage is not the optimal 90 degrees but this is best possible solution

Extension of the tiller arm on the rudder axis. The controlarm to the rudders are moved out a few cm to give room for the autopilot linkage

CCU unit mounted, it includes the compass an gyros

2020-04-28
All hardware is installed, rudder link arms adjusted and all set on deck. When the cockpit deck lids are screwed back there is no visual trace of the autopilot. My goal was to keep the cockpit and deck totally clear from extra obstacles.
Now i need to mount the Garmin GHC 20 helm control display in the cockpit. It's not really necessary as my Garmin EchoMap plotter can control the autopilot, but I still want the GHC 20 installed.

The autopilot control display mounted next to the Garmin plotter and Nexus seadata instrument, Nexus wind instrument is mounted on port side.

ⓒ 2020 Heli.nu / Adventure Media Production Nils Norin
Contact me if you own a Elan 210 and want to share experiences, tips and information about your boat

As all websites we are using cookies, but we do what we can to protect your privacy